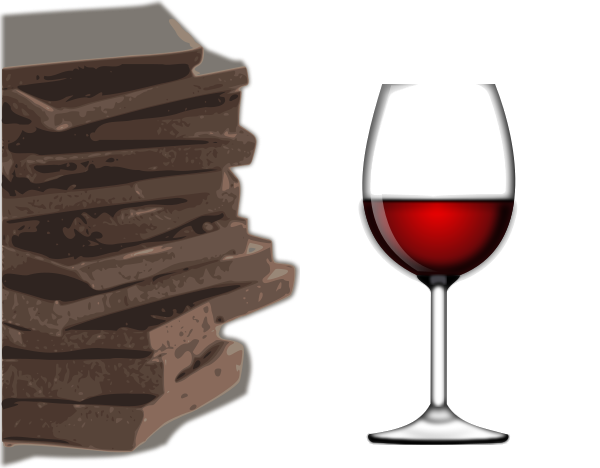 Studies over the last several years suggest red wine and chocolate may actually be good for us. It reminds me of a recurring comment we make at work when we decide to eat something unhealthy for lunch: if there’s any lettuce in the meal, it erases all the bad calories.

Although it’s humorous and nobody actually believes it, we’ve come to a similar illogical conclusion with red wine and chocolate.

Let’s start with red wine. Among other things, they say it contains resveratrol, which is good for the heart. This is not a false statement. Red wine does contain resveratrol, which has been shown by several studies to have these health benefits. But that’s not the whole story.

First, studies are hard to follow and they regularly contradict each other. This is not a surprise, because it’s nearly impossible to find conclusive studies on humans. Too many factors are outside the control of those conducting the study. People tend to do what they want, regardless what they may have agreed to do.

As a result, we tend to study animals instead, because their environment and diet can be much more tightly controlled. Unfortunately, this doesn’t present a same for same comparison. Although animals may have similar biology, they aren’t exactly us, which means the results of the study don’t necessarily have any relevance to humans.

Our attempts at translating the results of animal studies into human terms is one area where we run into problems. In terms of the studies about resveratrol, extremely high doses were used in the animal experiments. The proportional dose for a human is much higher than anyone would ever recommend.

As a result, there are several recommended doses of resveratrol. I found a range of daily suggested doses from 500mg per day all the way down to 20mg per day.

So how much do we get from red wine and chocolate?

In terms of red wine, we would need to consume 40 liters per day to get 500mg resveratrol, or over 1.5 liters to get 20mg. Clearly, 40 liters of red wine per day would be ridiculous. But even 1.5 liters would be way too much. That’s about 10 glasses of wine per day. Even if you cut that in half, you might get 10mg of resveratrol in 5 glasses of wine.

It’s even worse for chocolate. If we take a 3.5oz Green & Black’s 85% dark chocolate bar as an example, we’re getting roughly 3oz of dark chocolate, or about 85g. That will give you 0.2mg of resveratrol.

What else are you getting from these sources of resveratrol? In 5 glasses of red wine, about 600 calories, 5g of sugar, 20g of carbs and 5oz of alcohol. In dark chocolate, about 13.5g of sugar and over 600 calories. Even with resveratrol included, those are fairly unhealthy items.

The alcohol in red wine presents an interesting health problem. It blocks the liver’s release of hormones that our bodies need to regulate blood sugar. In the case of red wine, we’re consuming sugar and interfering with our bodies’ ability to deal with it. Over time, this can cause problems for your liver and pancreas, and can eventually lead to diabetes.

In terms of chocolate, those 13.5g of sugar in a high end dark chocolate bar are not devastating, but in combination with the already high amount of sugar in the American diet, it’s certainly ill-advised.

The bigger problem with chocolate is that most people prefer milk chocolate. This changes the quantities exponentially. Milk chocolate contains almost no traceable amount of resveratrol, and the sugar content rises from 13.5g to close to 50g.

In fact, eating an abundance of sugar regularly is likely to cause several problems. Too much sugar causes the liver to synthesize fats, which are exported as VLDL cholesterol. Over time, this can lead to heart disease, gout, elevated blood pressure, fatty liver disease, obesity and diabetes. Sugar can also be very addictive.

But the real problem with red wine and chocolate is not the lack of healthy balance. It’s that we keep trying to force a healthy image onto them. There are far better food sources of resveratrol. To call red wine and chocolate healthy because they contain resveratrol is like saying the swimming pool is full after pouring a gallon of water into it.

Should we stop consuming red wine and chocolate? That’s not the point. We should simply stop trying to claim that either is good for us. They are treats, indulgences, or cheats and should be viewed as such. It’s time for us to be adults and own up to that.