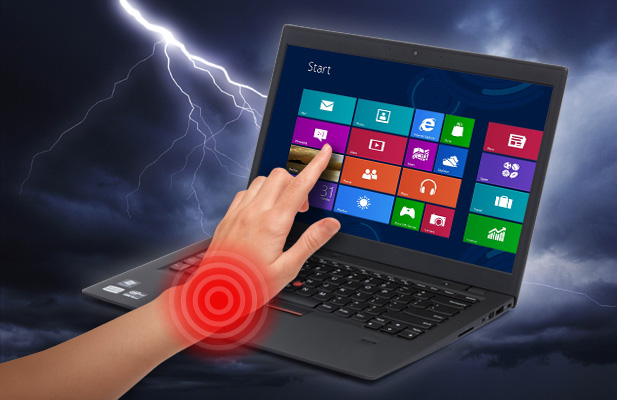 One important reason Apple spent so much time and energy on a touchpad that’s far and away better than those in the PC world is so that users won’t take their hands off their work to move the pointer on the screen – whether that’s moving their hand to the screen or to an external mouse.

A touchscreen laptop, on the other hand, requires repeated context switching. Are you using the keyboard, a mouse or the screen? It’s silly. And there’s more effort required in using the screen as an input device, not to mention far worse precision. Your finger will always be fatter than the pointer – I don’t care how dainty your hands are.

Another problem is strain. You must involve more muscles to hold your entire arm up while positioning your hand to point at things on a screen. This can lead to soreness in the shoulders and neck.

And don’t get me started on fingerprints on the screen …

The 2-in-1 concept is even worse. Take the already mentioned concept and turn it into a transformer. The end result isn’t an excellent anything. The laptop wastes power and battery life on a touch screen while presenting the user with a glossy, glare-prone, fingerprint-ridden screen. And in tablet mode, the user has a thick, heavy, unwieldy tablet with a useless keyboard-shaped back.

Unfortunately, we live in a time of gimmicky innovation. Even Apple has joined in with their Force Touch and Touch Bar. Hopefully, computer makers will come to their senses and give us reasonably productive devices again.

In the meantime, if you find these trends just as annoying as I do, some manufacturers continue to build laptops for productivity instead of fun and entertainment. Lenovo’s ThinkPad series is excellent, and if you want thin and light, check out the ASUS Zenbook series or Dell’s XPS series. All of these offer anti-glare screens, decent keyboards and usable touchpads. As a bonus, those of you who enjoyed the TrackPoint devices that were standard on laptops before touchpads became the norm will find that ThinkPads still have them.