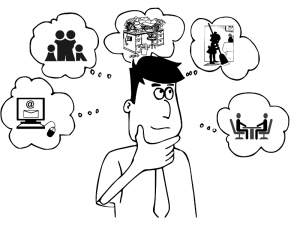 First of all, I have published a new book called Distraction-Free Writing! It’s available on Amazon in print and kindle formats. Get your copy here.

My second bit of news is that I have finally released The Bahawre Legend for iBooks! Get it here.

I realize The Bahawre Legend was published in March of last year, so it may seem odd that it’s finally appearing on iBooks.

The reason is simple. I was told I would get more sales by using Amazon’s KDP Select program. If you make your book exclusive to Amazon, they’ll do some marketing for you. Being a first-time author, this was enticing and seemed like the best approach at the time. So I enrolled in KDP Select to see how that would affect sales.

So I quit KDP Select and started looking at formatting my novel for iBooks. I very quickly learned why fewer authors publish to that platform.

First, you have to throw all your formatting out the window and start over. I won’t go into details because that would be a whole post on its own. Suffice it to say, the best option I found was to format in Pages, then import into iBooks Author and follow that path. While that can be frustrating, it’s not the most significant detriment.

The biggest problem is Apple is exclusionist by default. You can only run MacOS on Apple hardware (officially/legally). You can only use the tools for publishing to iBooks if you have iBooks Author and iTunes Producer, which only run on MacOS — which requires an Apple computer. Apple computers happen to be the most expensive versions of their respective categories across the board.

All this is to say that I couldn’t justify the purchase of a mac until I needed it for more than just publishing on iBooks. That time arrived when I got a new job, and I’ve finally done it. (And what a not-so-enjoyable experience it was). You can now get The Bahawre Legend from several places, including Amazon, Barnes & Noble, Kobo and finally iBooks (here, just in case you missed the link above).

Hopefully, I’ll be able to convert Distraction-Free Writing in the very near future. I’ll keep you updated!