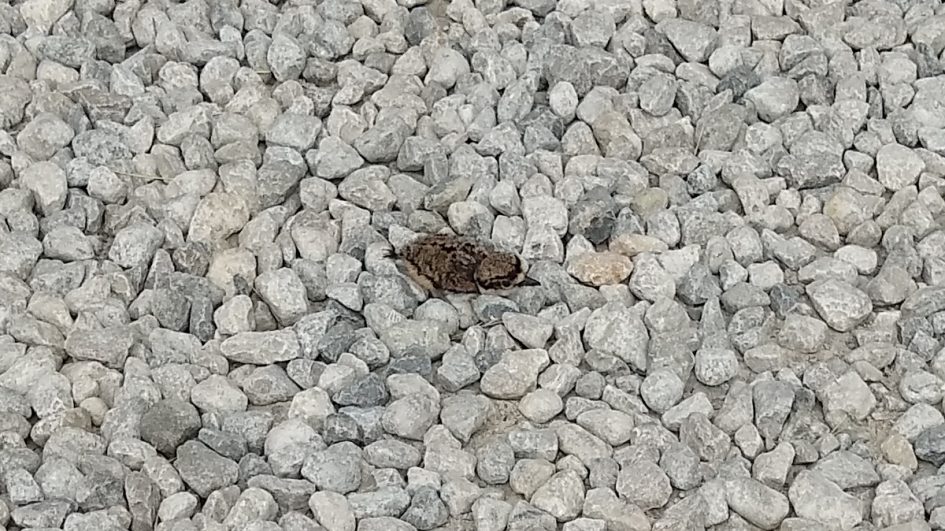 Hiding in the rocks

Sometimes, in the midst of all the stress, it’s nice to see that life goes on. My new job is good, but has a steep learning curve, which is stressful. And some family situations are adding to the pile. I am struggling to find the writing time I need to finish my next book or to write blog posts. But for the last three weeks, I’ve watched a couple of killdeer fight the ridiculous battle they fight every year to reproduce.

It’s one thing to put a nest in a tree, effectively excluding a large set of predators. It’s quite another thing for ground birds to adequately position and protect their nest. And sometimes, their lack of understanding when it comes to human construction produces an interesting situation.

This year, they chose a spot near the edge of our gravel driveway — a spot that happens to be our heavily-used turn around spot. For over three weeks, they’ve squawked at and pecked away anything that came near their nest. Being the nice humans we are, we put a wagon in the way so nobody would drive over the eggs. Then we watched as the pair protected their nest and took turns sitting on the eggs.

Killdeer are interesting birds. Their first line of defense is the fact that they’re difficult to see if you don’t already know where they are. When sitting on the nest, they hunch down and blend into the gravel. You wouldn’t know they were there unless you got too close.

If a large predator (like a human) gets too close to the nest, the killdeer have an interesting way of protecting it. They run away from their nest and fake injury so the predator will think they’re easy prey. Once chased, they fly a little farther and repeat the process until the predator is far enough away from the nest to no longer be a threat. I watched this happen with our dog multiple times. It certainly worked on her.

They also mercilessly attack other birds that approach. One day, I was concerned when I saw two crows waddling toward the nest. I was about to go outside and shoo them away, when both killdeer appeared out of nowhere and pecked at the crows until they left. Even more interesting, several other non-related birds joined in the attack. (Apparently, it’s not just farmers that don’t like crows)

The eggs finally hatched yesterday. One at a time, the baby birds came out of their eggs, then rested for awhile. After awhile, they got up and ran all over the place. Killdeer are up and running within minutes of hatching — one of their special skills. Mom and Dad chased them around and eventually herded them back to the nest. I think I probably gave the poor parents a heart attack when I got close enough to take some pictures and a video.

Anyway, this post contains a picture and a very short video of these cute little buggers. A reminder to me that no matter what else is happening, life goes on.