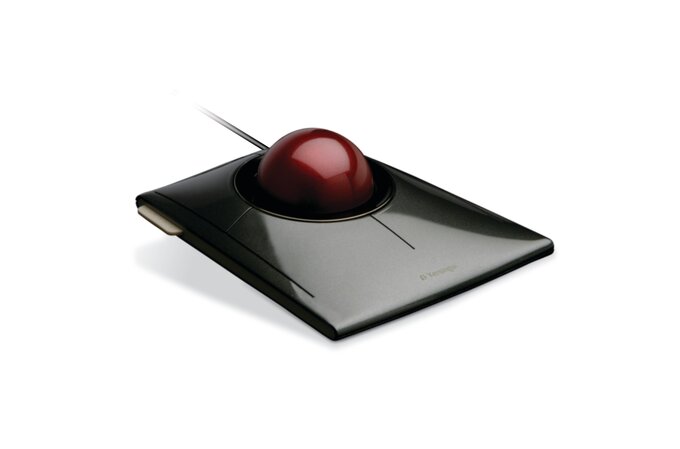 Those of you who know me know that I have a thing for input devices. Particularly keyboards and mice. I spend a lot of time at the computer on an average day, so my primary input devices are important.

Several years ago, The Kensington Slimblade arrived on the market. My daily-driver at the time was the Kensington Expert Mouse, which I reviewed awhile back. The Slimblade looked like a sleeker version with an intriguing new scrolling mechanism. But I couldn’t justify the $120 price tag at the time.

Time passed (as it does) and new items arrived. Like a wireless version of the Expert Mouse and some other similar competition. As a result, I saw more frequent sales on the Slimblade.

So I waited for one to go on sale and bought it. Not bad at $80. Comparable in price to the Expert Mouse and other high-end trackballs.

Before I get into the details, I’ll explain a little about trackballs for the uninitiated. Back in the old days, a mouse contained a ball that rolled as you moved the mouse. Wheels and sensors inside detected this movement and moved the pointer on the screen.

What made the trackball mouse unique is it inverted this design. The user moved the ball rather than the mouse. The mouse itself remained stationary. This saved space and was arguably better for ergonomics and wrist strain.

Over the years, mice (regular and trackball) have ditched the ball in favor of optical or laser sensors. No more wheels to get clogged with dust and lint. No more frequent cleaning sessions.

Still today, the main difference between a trackball and a regular mouse is the inverted design. You move the ball instead of the mouse.

There are different kinds of trackball mice, but most of them can be describe by 2 key features: the position and size of the ball.

There are no right answers. Simply what suits you the best. My personal preference is for a large center ball. I’m awkward with my thumb, so a center ball works better for me. And I feel like I get better accuracy with a large ball.

Hence my choices of the Kensington Expert Mouse and Slimblade. I reviewed the Expert Mouse quite some time ago in a previous post. And in this post, I will write about my experience with the Slimblade.

I like the feel of the buttons. Firm, yet not too stiff. Because they’re less distinct than the buttons on the Expert Mouse, I found myself missing occasionally at first. But once I got used to them, it wasn’t a problem. There are 4 buttons and they are assignable to a variety of things as you see fit with the provided software.

The big ball is something I enjoy. Some people prefer a smaller one, but I feel like I have more control and accuracy with a big trackball. Once properly broken in, it is a pleasure to use. And break-in is necessary for all trackball mice. You either find an appropriate way to lube it or you wait for it to happen naturally.

Scrolling was the big question mark coming in. The Slimblade abandoned the scroll ring in favor of using the ball to scroll. Spin the ball horizontally and you activate scroll instead of moving the mouse. In theory, I would be able to achieve a similar experience if the ball is properly broken in.

However, I have been unable to consistently produce a perfect spin angle. This results in the mouse moving as I try to scroll. So scrolling works great until the pointer migrates out of frame.

By contrast, the Expert Mouse has a scroll ring along the ridge of the ball socket. You spin it clockwise or counterclockwise. You can access it from just about any hand position. It will spin for nearly a full second, which can quickly take you to the bottom of a long page.

The Slimblade’s scrolling mechanism isn’t terrible. But it isn’t great either. I’m intrigued by the idea, but not overly impressed with the implementation.

But everything else about the mouse is quite nice. Firm buttons, nice ball movement and an aesthetically pleasing design make it a good, solid trackball.

I still prefer the Expert Mouse over the Slimblade, but only because of the scrolling mechanism. Apart from that, I think it would be a tie. If you find one on sale, I doubt you would be disappointed with the purchase.