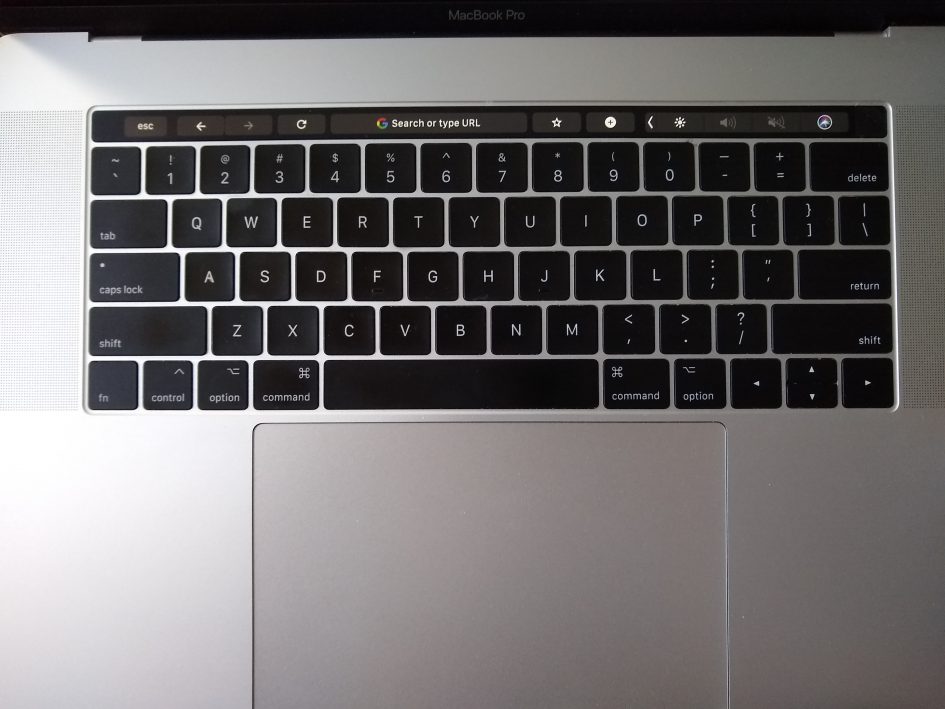 After the 2015 MacBook Pro, Apple made some anorexic decisions for the next iterations of their flagship laptop. What do I mean by Anorexic? The same thing I would mean about a human: an unhealthy obsession with losing weight to the point of self-harm.

I’m certainly not talking about the core specs. They’re top notch. The 2017 model I was issued at work came with an Intel i7 processor, 16 GB of RAM and a fast SSD. I never have to wait on this machine.

And the screen is beautiful. Not much compares to an Apple display — if the lighting is right.

But Apple has developed a case of anorexia. The laptop is so thin, they had to redesign the keyboard to fit. And therein lies the big problem with post-2015 Apple laptops.

The new butterfly mechanism allows for incredibly flat keys with virtually no travel. Hence, they fit in the thinner available space. But this new design creates new problems.

The keyboard is loud. Enough so that my typing sticks out among other laptop users. And the lack of key travel makes it difficult to type consistently. Did I type that last letter? I can’t be sure without looking.

What does the user gain from this thinner form? Will a millimeter or two help the laptop fit in a bag? Will it make a difference in portability? No. Nothing has been gained. Instead, Apple has sacrificed a reasonable, functional keyboard for a few millimeters of girth. Bad decision.

Am I being picky? Probably. But my primary activity on a laptop is typing. Whether it is PHP code or my latest novel, the keyboard is my primary method of interacting with my laptop. Can a different type of user get used to this behavior? Maybe. Probably.

But the problem is much worse than diminished functionality. A large amount of reported keyboard failures have been reported. According to reports, if you let any dust get under a key, it disables the key. And nobody has found a reliable way of removing the dust. The key must be replaced.

By replaced, I mean the entire top case, because the keyboard and top case are all one unit with no removable parts. Replacing the top case requires a significant amount of labor, since many other parts of the system are attached to this component.

Which brings me to the really bad news. If your machine is no longer under warranty (i.e. if you didn’t purchase Apple Care), it’s a $700 repair. For a broken key.

If your machine is still under warranty, then this is only an inconvenience. You’ll have to take it to an Apple store and they’ll fix it for you. I don’t know how long you’ll have to leave it with them.

And what will they replace it with? The same keyboard with the same design flaw that will probably, eventually result in the same failure. Apple hasn’t issued a recall. Worse, they’ve updated the keyboard in the newest version to make the same problem less likely. But they won’t admit they’ve fixed anything. Because they don’t want to admit anything is wrong. Because they don’t want to have to pay for it.

But look on the bright side. You’ll fit in at Starbucks with other owners of anorexic laptops, sitting in odd positions to avoid the glare on their screens.

Unfortunately, that brings up another issue with the MacBook Pro. If you sit in coffee shops, outside or anywhere else where you don’t control the lighting, you risk suffering from unworkable glare. It’s beyond me why Apple consumers are not allowed the choice of a matte screen, but it’s a serious oversight on their part.

While my personal laptop (a ThinkPad) may not sport a highly touted display, its matte screen allows me to work in sunlight or with glaring light behind me. Not so much with the MacBook Pro. I’ve written about this before, so I’ll leave it at that.

The Touch Bar is another strange problem. I don’t have an issue with the functionality it provides. Some people gain a great deal from convenient emoji selection. Graphic designers and videographers might also gain from the additional functionality specific to their niche.

But people who are accustomed to using the function keys (yes, many of us still exist), the Touch Bar represents removed, not added, functionality. Again, as with the matte screen, if we had an option to choose a function row instead of the Touch Bar, we wouldn’t be talking about this.

But it’s a problem for a significant segment of Apple’s user base. In the software development industry, there has been a bit of a mad dash on the 2015 MacBook Pro, because it’s the most up-to-date version of the machine that can be had with top-of-the-line specs and no Touch Bar.

If you are in the market for a MacBook Pro, you may want to consider a used 2015 model. At least until Apple produces a significant redesign of the keyboard. This does not appear to be in the works for 2019. Maybe in 2020.

And don’t get me started on the overly enormous touch pad ….