A Newbie’s Journey to a Writing Process 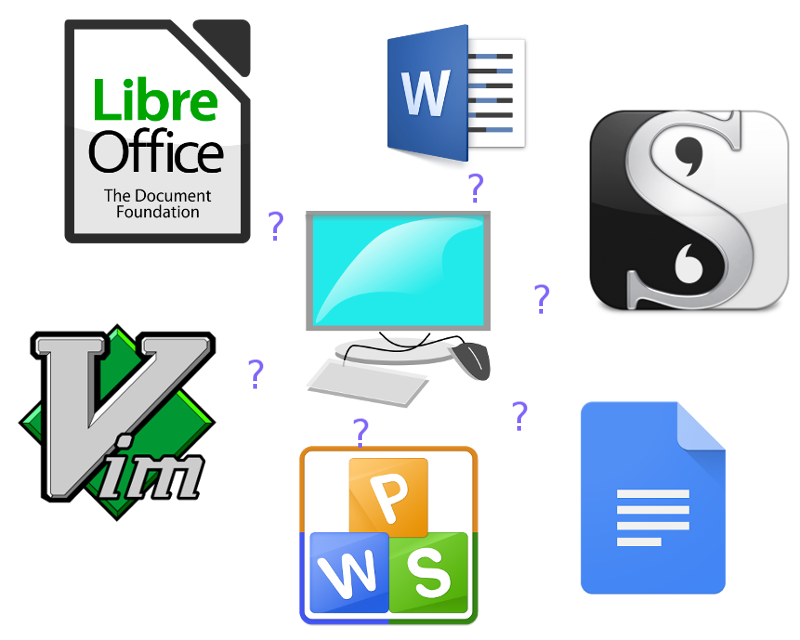 When I decided to start writing again, I didn’t realize how difficult it would be to find software to suit my needs. Sure, a lot of writers just open up Microsoft Word and have at it, but I was hoping for something less cluttered and more specific in purpose. And since I don’t use Windows, Word wasn’t going to work for me anyway. So I set out to find the perfect software for my writing process.

First, I’d like to point out that I’m not one of those Linux geeks who hates everything Microsoft does. I have used every version of Windows since version 3.11 and DOS before that. I’ve used multiple versions of Microsoft Office over the years, both personally and for work. And contrary to the stigma associated with Linux users, I am not opposed to purchasing software. It just needs to be better than the free alternatives.

Unlike a lot of non-technical people, I don’t simply use whatever comes with my system. I experiment with and choose software based on what works best for me. I have significant experience with Windows, OS X, Linux and the BSDs. I’ve spent large chunks of time with Microsoft Office, OpenOffice, LibreOffice, SoftMaker Office, WPS Office and iWork. I try to base my opinions on experience, not philosophy or arbitrary bias.

So when it came to writing, I brought my geeky mind to my search for writing software. I started with some simple Google searches. What was everyone else using? Like a lot of other industries, I found quite a few opinions. From simple text editors to Microsoft Word to Scrivener, I found not just different examples of the same sort of software, but a variety of types of software.

Based on my first few hours of research, I came up with an initial set of requirements. First, it had to work on all three of my devices. My equipment included a Linux desktop computer, an Apple laptop and an Android tablet. With my schedule and my varying locations, I regularly used all three devices.

First and foremost, I needed cross platform file synchronization. I started with Dropbox, but quickly discovered I wasn’t fond of the security issues most of these file synchronization services have encountered. Apple iCloud, Google Drive and Microsoft OneDrive all left me disappointed, mostly because they could only synchronize with one or two of my three devices, but also because of their privacy policies.

Ultimately, I decided to go with what I was already using in software development: git. Not only did it handle versions brilliantly, but it was available for just about any operating system I could imagine.

In terms of actual writing, I found that a significant portion of writers preferred Word. Since Word was a no-go on Linux and a disappointment on Android, I decided to give LibreOffice Writer and WPS Office a try. Combined, these two office suites were available for all of my devices and were reported to have reasonable compatibility with Word. This should have given me a similar experience on all of my devices.

It didn’t work as well as I hoped, and I came to understand the venom that flowed from the anti-Word camp. It wasn’t just Word, but word processors in general. All of them presented heavy and cluttered interfaces. With formatting buttons all over the place and multiple ways to save, export and share, I found it too easy to focus on anything but my writing.

In addition, every system was slightly different in how it displayed the same document. Even Microsoft Word didn’t display 100% consistently from one device to another. I found myself wasting time on formatting instead of writing, and I was consistently concerned that what looked good on one device might not look so great on another.

Another Google search revealed that some of the anti-Word people preferred tools designed specifically for writing novels, like Scrivener. I was pleased to find Scrivener beta for Linux, so I downloaded it and started playing. I liked how it broke things down into scenes, and I could move scenes around as I saw fit. I liked the organization. I liked how it forced me to think about characters, places and events.

However, it was designed primarily for Mac. I could use it on my Linux machine for free, because it was a beta version with some quirks. But there was no Android version. I would have to use other software on my tablet and import it once I got back to my desktop or laptop.

In addition, I didn’t like having to export to Word every time I needed to send something to someone else for editing or critique, and then convert back when I received feedback. I ended up with too many versions of files lying around and that invariably caused confusion and left me frustrated. Ultimately, I couldn’t justify the price for software that only worked as expected on one of my devices.

Resuming my search, I found a lot of other recommendations and tried quite a few other things. Geek, here. Remember? I couldn’t resist the plethora of possibilities. I tried FocusWriter, but I wasn’t happy with the choices of file format. I tried a plain text editor, but then I was stuck going back and forth between it and Word. Quite a few Android apps were excellent for writing, but they only worked on Android and not my other devices. It seemed I found a deal killer in every direction.

At this point, I decided to take a step back and re-evaluate my requirements. When I first started this journey, I expected to find one tool for writing. It was going to be simple and compatible with Word. It was going to work on all of my devices.

After months of experimenting, I came to a simple conclusion. The software I wanted didn’t exist. Being a software developer, maybe I could write it myself. But that would cut into my writing time and I didn’t want that. Instead, based on some advice I found in a writing forum, I decided to separate my writing process into two stages.

This may be common sense to seasoned writers, and maybe it should have been to me as well. After all, I have to use quite a few different tools in different stages of software development. I should have expected a similar situation for my writing process. This realization resulted in the writing process I have used ever since.

The first part of my process involves a simple text editor. I save my work as Markdown format, which allows me to add simple formatting, like bold or italics, without taking my hands off the keyboard. I call this my draft stage. I can edit my files on my desktop, laptop or tablet with no differences in formatting. As a programmer, Markdown makes a lot of sense to me, and it’s simple enough, I don’t think one would have to be a programmer to get it.

In this first stage, it’s all about the words, the story and the ideas. There are no toolbars or cluttered interfaces to deal with. I can just write. A text editor is akin to a spiral notebook. It’s just me and my words. Far better, in my opinion, than a word processor.

The second part of my process begins when I’ve completed a draft that I’m ready to send to someone else. At this point, compatibility with others is important. Features like comments and tracking changes are important. This is my editing stage. It’s not free flow time anymore. It’s details and edits. I convert my Markdown file to a Word document and send it off to whoever is going to edit or critique it. Rather than going back and forth between word processor and text editor, I keep the document in Word format from here on out. If something needs rewritten, I go back to the draft stage.

I mentioned earlier that Word does not work on Linux. Fortunately, there are a few excellent office suites that allow me to work with Word documents on any system. LibreOffice and WPS Office combine to give me everything I need on any system. I have yet to see a formatting issue between these office suites and Microsoft Word. Comments show up correctly and changes track as expected.

Overall, I now have a workable solution for writing my stories. Who knew it would be such a journey?